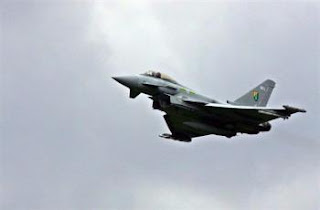 LONDON (AFP) — Oman is in talks to buy up to 24 Eurofighter Typhoon jets from British group BAE Systems in a deal worth at least 1.4 billion pounds, the Financial Times reported Thursday.
The business daily, citing British defence sources close to the negotiations, said the Gulf state wanted to replace its 24 ageing Jaguar jets with Typhoons within the next four years.
The Eurofighter multi-purpose combat jets have been developed by a consortium of Britain, Germany, Italy and Spain, with work divided in 1998 according to the number of aircraft each country planned to buy.
The FT said the jets planned for Oman would come out of the 88 that Britain is committed to buying, and help secure billions of pounds of maintenance and support work for BAE.
Saudi Arabia and Austria have also ordered the jets
Published in
http://afp.google.com/article/ALeqM5ijbtOU3iel-LXYSnfiPYW37PyT3Q
Posted by Thani Harith al Mahrouki at 00:01