Pulmonary tuberculosis
Overview
Symptoms
Treatment
Prevention
Definition:
Pulmonary tuberculosis (TB) is a contagious bacterial infection caused by Mycobacterium tuberculosis (M. tuberculosis) . The lungs are primarily involved, but the infection can spread to other organs.
Alternative Names:TB; Tuberculosis - pulmonary; Consumption
Causes, incidence, and risk factors:
Tuberculosis can develop after inhaling droplets sprayed into the air from a cough or sneeze by someone infected with M. tuberculosis . The disease is characterized by the development of granulomas (granular tumors) in the infected tissues.
The usual site of the disease is the lungs, but other organs may be involved. The primary stage of the infection is usually asymptomatic (without symptoms). In the United States, the majority of people will recover from primary TB infection without further evidence of the disease.
Primary pulmonary TB develops in the minority of people whose immune systems do not successfully contain the primary infection. In this case, the disease may occur within weeks after the primary infection. TB may also lie dormant for years and reappear after the initial infection is contained.
Infants, the elderly, and individuals who are immunocompromised -- for example, those with AIDS , those undergoing chemotherapy , or transplant recipients taking antirejection medications -- are at higher risk for progression to disease or reactivation of dormant disease. In pulmonary TB, the extent of the disease can vary from minimal to massive involvement. Without effective therapy, the disease becomes progressively worse.

The risk of contracting TB increases with the frequency of contact with people who have the disease, with crowded or unsanitary living conditions and with poor nutrition. Recently, there has been an increase in cases of TB in the U.S. Factors that may contribute to the increase in tuberculous infection in a population are:

In the U.S., there are 10 cases of TB per 100,000 people, but it varies dramatically by area of residence and socio-economic class. Also see:
Disseminated tuberculosis (affects the whole body)
Atypical mycobacterial infection

Posted by Thani Harith al Mahrouki at 01:52 No comments: 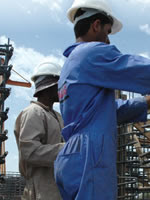 Dubai, Aug 18 (IANS) Eight telecom operators from Asia, Europe and the Middle East have been selected from the pre-qualification process for the sale of a 25 percent stake of Oman’s leading telecommunication services provider Omantel. Oman’s Ministry of Finance announced Monday that its advisors were satisfied with the outcome of the pre-qualification process “which has evoked serious and strong interest from highly credible and reputed international and regional, telecom operators”.
“The quality and number of expressions of interest received were very strong,” Darwish Ismail Al Bulushi, secretary general in the Ministry of Finance and chairman of the steering committee overseeing the Omantel strategic partnership process, said in a statement issued from Muscat.
“The level of interest is testament to the quality of the Omani macroeconomic scene, the opportunity in the Omani telecoms market and of Omantel itself,” he said, adding that the selected parties were being contacted.
“We now look forward to receiving the parties’ first round proposals in the second half of September,” Al Bulushi said.
The eight selected reportedly include Saudi Telecom, Qatar Telecommunications Company and Emirates Telecommunications Corporation.
Omantel is Oman’s first telecommunications company and the Oman government holds 70 percent stake in it.
Published in
http://www.thaindian.com/newsportal/uncategorized/eight-in-fray-for-oman-telecom-firm-stake_10085657.html
Posted by Thani Harith al Mahrouki at 01:14 No comments:

TEHRAN (FNA)- Iran and Oman have signed an agreement based on which Iran will export natural gas to Oman for export beyond the neighboring Arab state.
The agreement will open a new gas export route for the Islamic Republic. Under the agreement, Iran will export one billion cubic feet of natural gas to Oman's export terminal to produce liquefied natural gas (LNG), Business Intelligence Middle East reported Friday.
Iran's natural gas will be processed in Oman's Qalhat LNG plant. The plant can produce just under 10 million tons of LNG per year. "Potentially you could have Iranian gas actually being piped to Oman and then liquefied and sold on international markets," said Stuart Lewis, Middle East director at IHS, an energy consultant. The project was in its early stages but there were signs it would move ahead quickly; both sides were looking at finalizing the deal in September, Lewis said. "If you contrast that to all the projects under consideration and haven't come to fruition, this project could be quite significant," Lewis added.
Iran and Oman have been discussing gas cooperation, including development of the Hengam-Bukha field project, for years. Hengam is a joint field west of Bukha in Oman reportedly containing two trillion cubic feet of gas. "Before signing the agreement, the two sides agreed on exporting Iran's gas, developing the Kish gas field, Oman's investment in Iran oil and gas fields, including Hengam fields and developing these fields by the Iranian team and establishing a joint investment company," oil ministry's website Shana reported.
Published in
http://english.farsnews.com/newstext.php?nn=8705270529
Posted by Thani Harith al Mahrouki at 01:43 No comments:

Published: Tuesday 12 August 2008 11:08 AM CET, Telecompaper
The Telecommunications Regulatory Authority of Oman has invited expressions of interest for a new fixed communication licence. The licence will include national, local access and international services, including radio spectrum for broadband access and a submarine cable and landing station in Oman. The total licence will run for 25 years, while the spectrum rights will be valid for 15 years. Interested bidders must have at least 200,000 access lines in service for at least two years and hold assets of over USD 200 million. They also need experience in long-distance services and the start-up of a telecommunications network in a competitive market. Applications are due by 25 August, and the TRA can pre-qualify up to 10 bidders.
Published in
http://www.telecom.paper.nl/news/article.aspx?id=225907&nr=
Posted by Thani Harith al Mahrouki at 00:36 No comments:

By Marten Youssef, Staff WriterPublished: August 10, 2008, 23:49
For the past two decades an anonymous voice that comes over radio transmitters in the Gulf has been shrouded with a laughable mystery.
It is pitch-black in the operations deck, with exception to the odd red light sitting above the map of the Indian Ocean.
The crew of the Canadian navy ship, HMCS Calgary, gazes into the eerie, hushed sand starless night, which is rhythmically interrupted by the thundering sound of the warship crushing through the waters.
Channel 16 on the radio transmitter, used for distress calls, randomly screeches with the odd voice tearing through the silence - almost visibly.
In the most abrupt fashion, that shatters a sense of comedy into this tense hour, a squeaky voice announces over the transmitter. "Filipino Monkey", the caller stretches the words as if it was an opening line to a nightly performance and he is a standup comedian who just walked through the curtains with a mike in hand.
The crew laughs, unabated by the obscurity of this x-rated entertainer. Much of what the Filipino Monkey says is too profane to be repeated, but this faceless voice has become a comedy-relief and a cause for tension for the past four decades.
"We have to keep Channel 16 on when we are in our area of operation. It's the channel of communication here," says one of the Canadian sailors manning the radio transmitter.
The Filipino Monkey talks for hours and provokes ships in sometimes a vulgar exchange. He makes threatening remarks hoping to provoke seafarers, but few respond. "Sometimes he will get into a verbal fist-fight with other sailors and its humorous to listen to," the sailor says.
"There are war diaries from the Gulf War, and even before that, where there is reference to the Filipino Monkey," the sailor says.
First reference
As it turns out, the monkey has been around for a long time. In 1988, the first reference is made to the Monkey in a book titled No Higher Honor.
The book is an account of the US navy in the Arabian Gulf. In the book, Bradley Peniston, describes what it believed to be the first account of the Filipino Monkey.
"From time to time, the radio squawked, breaking the quiet with a burst of static. Most of the messages were fully routine, the expected traffic in a crowded sea. But every so often a high manic voice would break from the speaker: "Hee hee hee! Filipino Monkey!" No one knew who the caller was, or what he meant by his strange message."
The crew of the Canadian navy ship dismisses him as some bored figure that has nothing better to do but to taunt sailors.
In January 2008, it's believed that the Filipino monkey was the cause of an escalating tension between two warships passing through the Strait of Hormuz.
"There actually is no way to track him down or to ask him to stop, because that would just aggravate him to keep doing it," the sailor says.
Although little is known on the person behind the monkey, sailors believe the original source is long gone and has been replaced by imitators who are trying to relieve themselves of the all-too-often mundane life of seafarers.
Published in
http://www.gulfnews.com/opinion/off_cuff/10236044.html
Posted by Thani Harith al Mahrouki at 23:38 No comments:

http://www.tvquran.com/
Posted by Thani Harith al Mahrouki at 03:18 No comments:

Email ThisBlogThis!Share to TwitterShare to FacebookShare to Pinterest
Labels: عمان

Thursday, 7 August 2008 12:04
An investment fund from Oman has bought a 50% interest in the budget hotels chain Jurys Inns. The announcement was made by property investment group Quinlan Private, which bought the business for €1.15 billion last year from the Jurys Doyle group.
Oman Investment Fund is the investment arm of the Sultanate of Oman. Its deputy CEO Hassan Al Nabhani said it was impressed with the quality of the business and its growth potential.
Since Quinlan bought the chain, it has opened three new hotels, bringing the total to 23 in the UK and Ireland. A further 10 are due to open over the next couple of years, while Inns are planned for Prague and Budapest in 2010.
Published in
http://www.rte.ie/business/2008/0807/jurys.html
Posted by Thani Harith al Mahrouki at 02:51 No comments: