The UAE is likely to raise gasoline prices in September


An on-flight bomb scare that out to be a hoax forced an Air India passenger jet to make an emergency
Read more »
Posted by Thani Harith al Mahrouki at 14:26 No comments:

No plan to block BlackBerry services in Oman

Press Trust of India / Dubai August 10, 2010, 16:12 IST
Oman has said it does not plan to block BlackBerry services even as Saudi Arabia is working with the device maker RIM on a solution that
Read more »
Posted by Thani Harith al Mahrouki at 23:55 No comments:

Reuters August 8, 2010 1:04 AM
Militants attacked a Japanese supertanker with explosives near the Strait of Hormuz, one of the world's most
Read more »
Posted by Thani Harith al Mahrouki at 15:46 No comments: 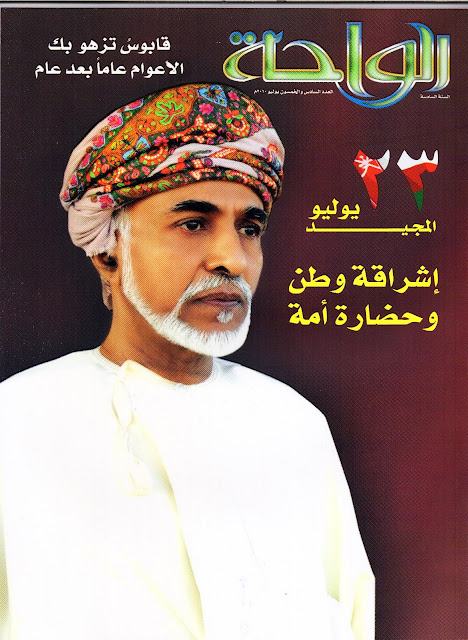 Posted by Thani Harith al Mahrouki at 01:15 No comments:

By MARGARET COKER
margaret.coker@wsj.com
—Spencer Swartz contributed to this article.
ABU DHABI— Investigators in the United Arab Emirates have concluded that an Omani suicide bomber in an explosives-laden motorboat attacked a Japanese-owned oil tanker last week as it traveled through the
Read more »
Posted by Thani Harith al Mahrouki at 00:21 No comments:

By Bob Cox
rcox@star-telegram.com
Lockheed Martin will someday build the last F-16 fighter jet at its Fort Worth plant, but that day is still years away.
Lockheed could be close to landing another foreign order for F-16s after the Defense Department notified Congress on Tuesday that the government of Oman requested permission to negotiate to buy 18 planes, weapons and other equipment worth about $3.5 billion.
It would be Oman's second F-16 purchase after taking delivery of the first of 12 in August 2005. Just a year ago Lockheed's F-16 order backlog was down to about 80 planes, and production was slated to end in 2012. But late last year, Egypt and Morocco each ordered 24 planes, extending the production line another year.
"I think we're into 2013, and 18 F-16s for Oman would extend the line until summer of 2014," Lockheed spokesman Joe Stout said. The F-16 order backlog was 81 planes at the end of June.
The Oman deal still faces several hurdles. Congress has 30 days to veto the proposed sale. If that does not occur, the U.S. government would extend a formal offer to sell planes to Oman. Once that offer is accepted, Oman and Lockheed would negotiate terms of a sale.
The Block 50/52 model aircraft Lockheed is now building and delivering to most foreign customers is essentially on a par with the latest aircraft operated by the U.S. Air Force.
In addition to the 18 planes, at cost of $60 million each, Oman would purchase weapons systems, radars, navigation and other electronics systems. It would also get upgraded components for its 12 existing F-16s.
The Defense Security Cooperation Agency, which handles controlled weapons sales, said in its message to Congress that the proposed sale would not upset the military balance of power in the Middle East and would enable Oman to cooperate with U.S. and allied forces.
Lockheed delivered 31 F-16s last year. It is building about two a month, with 11 delivered in the first six months of 2010. Teal Group aerospace analyst Richard Aboulafia said it's conceivable that F-16 production could extend beyond 2015 or well beyond if a couple of large deals are consummated. "If you adjust [the price] for inflation, the F-16 is an incredibly good deal," he said.
Lockheed is pressing India to select the F-16 for an order of 126 multirole fighters the nation has been considering buying in a drawn-out procurement process. Taiwan would like to buy 66 new model F-16s, but both the Bush and Obama administrations have refused for fear of upsetting China.
Sales of the F-35 joint strike fighter were supposed to have sealed the fate of the F-16, but years of delays and soaring cost estimates could keep the F-16 production line going.
"The most interesting thing is Israel. Given the sticker shock they seem to be having about the F-35, they could decide to opt for a high-low mix of some F-35s and more F-16s," Aboulafia said.
He said Israel and other F-16 owners could decide to buy some additional jets over the next several years to replace their oldest planes.
Bob Cox, 817-390-7723
Published in
http://www.star-telegram.com/2010/08/04/2384492/lockheeds-f-16-shows-resilience.html
Posted by Thani Harith al Mahrouki at 01:27 No comments:


(CNN) -- A militant Islamist group has claimed responsibility for the explosion aboard an oil tanker in the Strait of Hormuz near Oman last month.
In a statement posted on various websites that regularly carry messages from al Qaeda leaders, the Abdullah Azzam Brigades included a picture of a man they claimed carried out a suicide attack on the tanker on July 28. The group said the attack was intended to "strike an economic blow to the infidels."
CNN was not immediately able to authenticate the claim.
The group, said to be inspired by al Qaeda, is believed to be behind several attacks in the Middle East, including the October 2004 attack on a hotel and nearby camp sites in Egypt that killed more than three dozen people.
The statement from the Abdullah Azzam Brigades said the attack on the tanker was the "conquest of Sheikh Omar Abdel-Rahman" -- a reference to the imprisoned blind cleric who inspired the 1993 World Trade Center bombing in New York.
"In a blessed episode of our Jihad in the name of God and in order to weaken the global infidel network, a battalion from our Jihadi brethrens managed to carry out an operation in order to strike an economic blow to the infidels," the statement said.
"After midnight on last Wednesday, the hero, the martyrdom seeker Ayoub Tayshan, blew himself up in the Japanese tanker M. Star in the Strait of Hormuz between the United Arab Emirates and Oman causing damages, that were reported all over the international media outlets. This heroic operation will have a major effect on the global economy and the oil prices."
The day after the July 28 blast, the owner of the Japanese-owned, Marshall Islands-flagged M. Star said the ship suffered hull damage caused by an explosion which "seemed to be an attack from external forces."
But Capt. Musa Murad, director of the port of Fujairah in the United Arab Emirates, gave a different account of the incident. He told WAM, the state run news agency, that the tanker was passing through the strait when it was exposed to a high wave as a result of an earthquake shock.
The Brigades, in its message, made mention of the UAE account. "The enemies of God wanted to hide the truth of what happened in this operation and some even tried to explain it by saying there was a strong earthquake. But indeed, our martyrdom-seeker shook the grounds underneath them by reaching his precious goal, proving to the global infidels again that the guardians of God -- the Mujahedeen -- will open the most difficult doors with God's blessing, and nothing will stop them -- no security system nor the intelligence service."
The M. Star was bearing two million barrels of oil, according to the port of Fujairah marine department. The tanker with 31 crew members -- 16 from the Philippines and 15 from India -- on board, was heading to the port of Chiba, Japan.
The Strait of Hormuz is a narrow body of water between Oman and Iran, leading from the Gulf of Oman to the Persian Gulf.
An Omani enclave sits on the southern coast of the strait.
Published in
http://edition.cnn.com/2010/WORLD/meast/08/04/uae.tanker.explosion/#fbid=H1S7miktLc8
Posted by Thani Harith al Mahrouki at 17:13 No comments:

The Arab world is set to get another giant ship repair yard. Oman Drydock Company (ODC) is planning to commence ship repair operations at its new yard in Duqm in March 2011.
Duqm is in the Al Wusta Region of Oman, located in the southeast corner of the Arabian peninsula.
The shipyard will have two ULCC-sized graving docks -- measuring 410 m x 95 m and 410 m x 80 m which are being built by a consortium of Korea's Daewoo Engineering and Contracting and Galfar Engineering and Contracting.Daewoo Shipbuilding and Marine Engineering Co has a ten year agreement (renewable for another ten years) to operate and manage the facility, which is owned by the Government of the Sultanate of Oman.
The yards initial market focus will be on oil tankers and LNG carriers, with its first customer being the state-owned Oman Shipping Company. It has a current fleet strength of 48 vessels, including tankers, LNG vessels and bulk carriers--and ambitious expansion plans.
Duqm's strategic location on the Arabian Sea is seen as giving it a competitive advantage. And whereas ships going to rival giant repair yards in the region have to go to Fujairah to remove residuals before repair, Oman Drydock Company is investing in aslop reception and sludge treatment plant.
The number of vessels that can be repaired at the yard will be limited in the initial months, with operations starting with a work force of 600 people. But the yard will be able to handle to 120-130 vessels in a year once it stabilizes operation, when the workforce will go up to 3,000.
Published in
http://www.marinelog.com/DOCS/NEWSMMIX/2010aug00024.html
Posted by Thani Harith al Mahrouki at 00:47 No comments:

USA Navy confirms no vessel were near the Japanese damaged supertanker

Reporting by Raissa Kasolowsky; Editing by Amran Abocar
DUBAI July 29 (Reuters) - There were no U.S. Navy or maritime coalition vessels near a Japanese supertanker damaged in an incident in the Strait of Hormuz, a Fifth Fleet spokesman said on Thursday. Asked if there were any U.S. navy or coalition vessels close to the supertanker at the time, he said: "No, there were none close to the ship ... none of our vessels were involved."
He was speaking by telephone from Bahrain.
© Thomson Reuters 2010 All rights reserved

Published in
http://af.reuters.com/article/energyOilNews/idAFLDE66S12I20100729
Posted by Thani Harith al Mahrouki at 00:26 No comments: