Two US nationals held in Iran freed and left to Oman 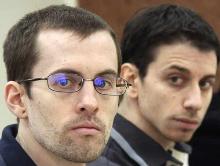 Sept. 21 (Bloomberg) -- Two U.S. nationals held in Iran on charges of espionage and illegal entry into the country were freed from prison and left from Mehrabad International Airport in the Iranian capital on a flight to Oman, the official Islamic Republic News Agency reported.


Shane Bauer and Josh Fattal were released from Evin prison today and handed over to the Swiss Embassy in Tehran, Masoud Shafiei, their lawyer, said earlier today in a telephone interview. The Swiss mission represents the interests of the U.S., which doesn’t have diplomatic ties with Iran.
The two Americans were released after an Iranian judge signed documents today approving the payment of $500,000 each on their behalf, according to Shafiei, who said that Oman had arranged for the money.
Bauer and Fattal, both 29, have said that they were hiking in Iraq in July 2009 and mistakenly wandered across the border. The U.S. has repeatedly called for their release. Their prolonged detention has added to tensions between Iran and the U.S. and highlighted frictions among Iran’s ruling elite.
Video of Swiss and Omani diplomats waiting in cars near the prison was broadcast by the state-run Press TV news channel today. Oman also acted as a facilitator last year by organizing the payment for the release of Sarah Shourd, another U.S. citizen who was hiking with Bauer and Fattal and also was arrested.
Revolutionary Court
Shourd, who became engaged to Bauer while both were in jail, was released in September 2010 on $500,000 bail. She left for the U.S. immediately via Oman and didn’t return to Iran to stand trial. The men were sentenced by the Revolutionary Court on Aug. 21 to eight years in prison.
Shourd joined Bauer’s parents and sisters and Fattal’s parents and brother in Muscat, Oman’s capital. “We have waited for nearly 26 months for this moment and the joy and relief at Shane and Josh’s long-awaited freedom knows no bounds,” the families said in a statement.
News of the men’s release was announced shortly before Iran’s President Mahmoud Ahmadinejad arrived in New York for the United Nations General Assembly, where world leaders gather each year.
Retired U.S. Ambassador William G. Miller was among the individuals and groups who worked to arrange the high-level meetings that led to the Americans’ release through Search for Common Ground, a Washington-based organization that focuses on conflict resolution.
Signal from Iran
The timing of Bauer’s and Fattal’s release “may very well have something to do with the timing of Ahmadinejad’s presence in New York,” said Miller, who served in Iran for five years and was ambassador to the Ukraine.
“This is a signal from the Iranians that they’re interested in talking,” Miller said in a telephone interview. After 32 years of mutual isolation, he said, the Iranian move is important.
“It’s a good gesture and compassionate gesture,” he said.
The release process was complicated by internal conflicts between the Iranian president and other political bodies, with officials making contradictory remarks.
Ahmadinejad told NBC News in an interview aired on Sept. 13 that he was arranging for Fattal and Bauer to be released “in a couple of days” on humanitarian grounds. The following day, Iran’s judiciary said that their release wasn’t “imminent” and that legitimate information on the matter would only come from the judiciary.
Held in U.S.
The arrest and detention of foreign nationals on charges of spying isn’t unprecedented in Iran, which accuses the U.S. and its allies of seeking to topple the Islamic government. Officials in Tehran also criticize the U.S. for holding a number of Iranians whom Iran considers political detainees.
At least 10 Iranians are being held in U.S. prisons, said William Beeman, the chairman of the department of anthropology at the University of Minnesota.
“They were apprehended in Europe, rendered against their will to the United States and convicted of violating trade sanctions,” he said.
The Iranians are “being held largely incognito,” Beeman wrote in an e-mail yesterday. “When defense lawyers try to locate them, they are moved. This is partly why we don’t have an accurate list of these people.”
In February 2010, Ahmadinejad said Iran may be ready to exchange Fattal and Bauer for Iranians held in the U.S., an overture that at the time was dismissed by the State Department.
UN Sanctions
The United Nations has imposed a series of sanctions on Iran for its nuclear program, which the U.S. alleges is a cover for building atomic weapons. Iran rejects that assertion and says it needs nuclear technology to provide energy for its growing population.
Prior to their detention, Shourd and Bauer had lived together in Syria’s capital, Damascus, where she learned Arabic and taught English, according to freethehikers.org, a website set up to help gain their freedom. Fattal is an environmentalist who was visiting Damascus before the three headed to Iraq, according to the website.
Bauer is a Minnesota native, Fattal is from Pennsylvania and Shourd is from California.
In 2007, Iran sparked a crisis when it seized 15 U.K. sailors and marines it accused of trespassing in Iranian waters and held them for two weeks. Two years earlier, Iran jailed a Frenchman and a German citizen who had strayed into Iranian waters during a fishing trip. Sentenced to 18 months in jail, they were freed after being granted clemency by Iran’s supreme leader, Ayatollah Ali Khamenei.

Published in
http://www.businessweek.com/news/2011-09-21/u-s-nationals-freed-from-iranian-jail-travel-to-oman.html
Posted by Thani Harith al Mahrouki at 00:29