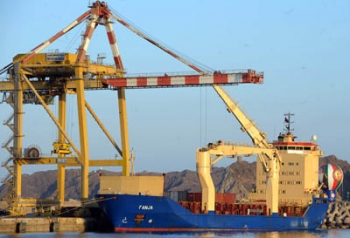 Oman (Muscat) - The first voyage of the container carrier "Fanja" from the Sultanate's ports to the ports of the Mediterranean Sea and Red Sea was inaugurated in Port Sultan Qaboos today under the auspices of Ahmed bin Abdulnabi Macki, Minister of National Economy, Deputy Chairman of the Financial Affairs and Energy Resources Council and Chairman of Oman Shipping Company (OSC) in the presence of officials and ambassadors to the Sultanate and chairmen of the companies operating in various shipping fields in the Sultanate.
Macki said that the inauguration of the first voyage of the Container Carrier "Fanja" represents joint cooperation between the Sultanate and the brotherly and friendly states overlooking the Mediterranean Sea and the Red Sea, which will connect the Sultanate with other major markets in the neighboring countries to promoting trade exchange with these states.
Macki added that the launching ceremony coincides with the Sultanate's celebrations of the 40th Glorious National Day, indicating that the goal behind the foundation of the Oman Container Company, which is a part of the Oman Shipping Company to be a part of the company's long-term strategy for extending and diversifying its maritime routes. He pointed out that the Sultanate has established the infrastructure of this industry by founding Oman Shipping Company that has 42-ship fleet, in addition to, the dry dock in A'Duqum that will be ready early next year and will have the capacity for all kinds of ships.
Macki explained that the Sultanate's government established the International Maritime College, Oman (IMCO) in the Wilayat of Sohar that is currently providing education to 840 students. This college will provide the shipping sector with graduates in various specialties. The establishment of this company and the college, as well as, the Marine Transportation Academy will complete the Sultanate's shipping industry infrastructure.
Macki added that Oman Shipping Company works for increasing and diversifying its fleet by possessing various types of ships. Today, the company adds another significant and vital activity, which is the container carrier sector.
Macki said that the route of Oman Container Company that was inaugurated today will include the container carrier services between the Sultanate, Egypt, Lebanon, Syria, Turkey and Libya. The company also plans to cover a number of the ports locating in the same route in order to directly connect the Sultanate with its trade partners.
"Oman shipping Company will work on activating this route throughout joint efforts with the private sector, particularly because the volume of trade exchange served by this route is continuously growing as the Sultanate's trade exchange with these states increased by 5% from USD$554 million in 2008 to USD$583 million in 2009", Macki added.
Mecki said in a statement to Oman News Agency (ONA) that the Container Carrier "Fanja" will transport the Omani exports and products to the markets and ports of the states that are not directly connected with the Omani products, so this will help in strengthening the trade links and reinforce the economic relations between the brotherly and friendly countries, which have strong cooperation with the Sultanate.
"As Oman Container Company starts to operate container carrier with capacity of 800-1000 containers of various volumes will largely contribute in spreading knowledge about the existence of a direct route between the Sultanate and the ports of Port Said, Beirut, Latakiyah, Mersin in Turkey, Tripoli in Libya, as a first phase. There will be extension for establishing new routes to other ports as per well-studied plans and programmes that guarantee the success of the services rendered by the company," Macki furthered.
On his part, the Executive President of Oman Shipping Company said that Omani Container Company has hired agents in the ports that will be covered by the voyages of the carriers, in addition to, spreading a large number of carriers upon these ports for the sake of achieving the largest possible volume of commercial marketing for the services offered by the company.
(ONA)
Global Arab Network
Published in
http://www.english.globalarabnetwork.com/201012198415/Economics/fanja-oman-inaugurates-container-carrier.html
Posted by Thani Harith al Mahrouki at 08:14