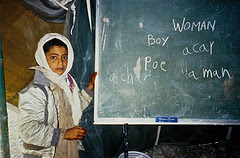 Life is better in most nations since UN began tracking human development index 20 years ago, but progress hasn't been uniform .


Basic aspects of life such as health and education have improved for the vast majority of the planet's population in the past two decades, with the greatest strides seen in the poorest countries, a United Nations report said Thursday.
The UN's human development index, launched in its 20th edition, shows that while development has not been uniform, huge steps in areas such as life expectancy, school enrolment, literacy and income means its index of 135 countries has climbed 18 per cent since 1990 and 41 per cent since 1970.
"Over the past 20 years many people around the world have experienced dramatic improvements in key aspects of their lives," the report said. "Overall, they are healthier, more educated and wealthier and have more power to appoint and hold their leaders accountable than ever before."
The country that has made the most strides in the past 40 years, particularly education, is a small Middle Eastern nation of just three million people: Oman. This is followed by China, Nepal, Indonesia and Saudi Arabia. Life is vastly better for several African countries as well, such Ethiopia which ranks 11th in terms of most improved.
The 2010 edition of the report includes new measures that track inequality, gender inequality and poverty.
The country ranked as the highest human development is Norway. Australia, New Zealand, the United States and Ireland follow.
Canada sits in eighth place. While the UN's methodology has changed, making past comparisons difficult, it's worth noting that Canada has sat atop the development index eight times previously.
Progress hasn't been uniform, though, and a few countries have even slid backward. Three - Zimbabwe, the Democratic Republic of the Congo and Zambia - have worsened in the 20-year period, while in the former Soviet Union, health has regressed. The main causes of the slippage tend to be conflict, AIDS and economic and political mismanagement.
Life has broadly improved, even in countries that have seen little improvement in income. Some countries have improved health and education scores without similar gains in economic development. The report ties that with health-saving technologies and the flow of innovative new ideas across borders.
"Poor countries are catching up with rich countries," it said.
The report has been revised in its latest edition, though further changes - in areas such as sustainability and freedom - will be needed in the future, the UN said.
Income inequality has grown since the 1980s, especially in countries of the former Soviet Union. Most countries in East Asia and the Pacific have higher income inequality than a few decades ago. Latin America and the Caribbean are the exception.
The recession has hindered progress, it cautioned. The global downturn has caused 34 million people to lose their jobs and 64 million more people to fall below the $1.25 (U.S.) a day income poverty threshold.
About 1.75 billion people live in poverty, with the highest proportion of poor people in sub-Saharan Africa.
UN Human Development Report 2010:
http://beta.images.theglobeandmail.com/archive/00986/UN_Human_Developmen_986841a.pdf

Published in
http://www.theglobeandmail.com/news/world/oman-most-improved-nation-in-last-30-years-un-index-says/article1785592/
Posted by Thani Harith al Mahrouki at 23:09