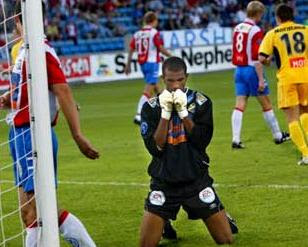 Dubai: Oman and Bolton Wanderer's goalkeeper Ali Al Habsi, the only GCC-born footballer playing in Europe, has signed a year-long loan deal with Wigan Athletic to provide cover to injured shot-stopper Chris Kirkland.
The 28-year-old former Muscat Airport fireman has been on Bolton's books since 2006 playing second fiddle to first-choice Finnish international Jussi Jaaskelainen. Al Habsi has featured 18 times in league and cup appearances with six clean sheets to his name. He's represented Oman on over 70 occasions winning best keeper at the Gulf Cup five times, including at the tournament the sultanate won, for the first time, in January 2009.
Speaking exclusively to Gulf News Al Habsi said of his Wigan deal, "It's been a long time coming but it's finally here, this is my chance to prove myself as Wigan's first choice keeper. I'm going to give everything. I have confidence in my ability and Inshallah I will come back to Bolton at the end of the year stronger. I'm very happy, this is a fantastic opportunity."
Signed deal
Al Habsi found out on Wednesday night that Wigan wanted him on loan and went into the DW Stadium to sign a deal yesterday morning.
He joins first team training on Monday.
58-year-old John Burridge, the former Newcastle United and Aston Villa goalkeeper who discovered Al Habsi at 15 years old, playing in a dustbowl at third division Mudhaibi, said: "I'm over the moon. This is Ali's big chance. Just as Joe Hart proved himself at Birmingham last season on loan, after being overlooked at Manchester City, Ali too will finally get his chance to shine."
"I've coached Nigel Martyn, Tim Flowers, Nigel Spink, Steve Harper and Paul Robinson and no one is as good as Al Habsi. He has the best attitude, size and spirit. I'm thankful his chance has finally come."
Al Habsi could have followed coach Sam Allardyce to Blackburn with a Bosman last July, but Bolton held him to the condition that, while he was still under contract, if he wanted to be released to play in January 2009's winning Gulf Cup campaign he would have to sign a four year contract extension. His preference to play for his country arguably set back his progression at club level.
Al Habsi's brother and manager Ahmad Al Habsi said: "The phone hasn't stopped ringing. There's so much joy and happiness here not just among family but the whole country — Ali is the only guy raising an Omani flag in the EPL." Kirkland will miss the start of the season so Ali effectively walks in as first choice keeper."
Published in
http://gulfnews.com/sport/football/oman-s-al-habsi-heads-to-wigan-on-year-long-loan-1.654986
Posted by Thani Harith al Mahrouki at 16:01