A new standalone Islamic bank in the sultanate needs the Central Bank of Oman new set of regulations.

Analysts say that the banking industry in Oman can look forward to taking advantage of the 'potential' of Islamic finance after it was approved by His Majesty Sultan Qaboos bin Said. 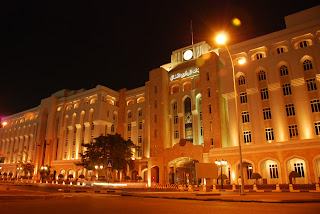 With existing banks now able to provide Islamic banking products, the sultanate will be able to take its share of an industry estimated to be currently worth US$20bn worldwide.
Along with the decision to allow Islamic finance products, the green light was also given to set up an Islamic bank in the sultanate. However, bankers feel that a new standalone Islamic bank in the sultanate would take shape only after the Central Bank of Oman (CBO) comes out with a new set of regulations.
With experts allowing for up to six months for changes in the banking laws to accommodate Sharia-compliant products, it is believed that the move will open up new opportunities for existing commercial banks, said Joice Mathew, head of research at United Securities.
He added that the local banks' ties to regional banks - such as BankMuscat's association with BMI Bank in Bahrain and NBO leveraging on the expertise of major shareholder Commercial Bank of Qatar - which already offer Islamic finance products will mean they could easily introduce new products into the market.
Mathew said, "As far as existing conventional banks are concerned, the decision in general opens up new revenue streams, if the CBO allows them to start Islamic banking from new dedicated branches."
However, the introduction of a standalone Islamic bank in Oman will depend on how long it takes to implement Islamic banking regulations, according to HSBC chief executive Ewan Stirling. "Until we have clarity on regulations, we do not know how long it will take. Different countries have different approaches, so there are no standard regulations. It is still very, very early days."
Kanaga Sundar, an analyst at Gulf Baader Capital Markets, added that it'll still be some time before Oman's Islamic finance products could compete with more experienced banks in the region.
He said, "I think there definitely is phenomenal potential here in Oman. People looking for an Islamic product go to the regional market. The market potential here is therefore robust.
"Clearly, it is a positive sign for the banking sector in the medium to long term. They might be able to compete with the major players in the longer term, but not immediately."
Anil Kumar, vice-president of Fincorp, said that although it will take some time for the market to 'evolve' and adapt to Islamic finance, there are 'significant opportunities' in the domestic market. "There is a lot of potential for growth in the Islamic finance industry in Oman. From that point of view, it is a welcome move."
Abdul Kader Askalan, chief executive officer of Oman Arab Bank, believes the change could make Oman's banks more competitive regionally as they tap into a customer base looking for Sharia products. "I think there are a number of people, from merchants to individuals, who deal with Islamic banks in neighbouring countries. I think there is a large amount of deposits in Islamic banks in neighbouring countries," he said.
© Muscat Daily 2011
Published in
http://www.zawya.com/story.cfm/sidZAWYA20110504061613
Posted by Thani Harith al Mahrouki at 17:03