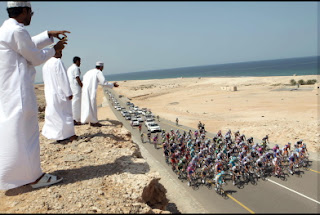 
MUSCAT: Robert Gesink didn't need reminding of his credentials as a Tour de France contender this year.
But a brilliant time-trial win in the Tour of Oman by the Dutchman that all but secured his overall victory in the six-stage race prompted everyone who witnessed his feat to talk up his chances in July.
''I got sixth in the Tour [last year] so I think I am already a GC [general classification] rider, and largely knew that,'' Gesink (Rabobank) said after clocking a winning time of 29 minutes, 21 seconds in the 18.5 kilometre time trial out and back on a hilly, windswept course from the race hotel in Al Jissah.
Advertisement: Story continues below Gesink, whose climbing prowess was a vital asset, beat the Italian duo of Giovanni Visconti (Farnese Vini Neri) by 16s and Marco Pinotti (HTC-Highroad) by 24s. In fourth and fifth were the two riders whose power rather than climbing was thought to have been a more suitable strength - Swiss world time-trial champion Fabian Cancellara (Leopard) at 27s and Norwegian Edvald Boasson Hagen (Sky) at 29s.
Gesink's win virtually sealed his overall victory in the 845km tour.
Going into Sunday's final stage, a 157km race from Qurayat to Mattrah Seafront suited to sprinters, his overall lead and grip on the red jersey was 1.13 on Boasson Hagen and 1.19 on Visconti.
Gesink's success in Oman has been emotional. When he won Friday's fourth stage to Green Mountain to take the lead from Australian Matt Goss (HTC-Highroad), he dedicated the win to his late father Dick, who died last October from injuries sustained in a motorcycle crash.
His victories on Friday and on Saturday touched many. Shortly after his time-trial win on Saturday, Cancellara summed up what many were thinking when, as part of a congratulatory posting on his Twitter, he told Gesink: ''Your father would be proud off you.''
Gesink's climbing prowess came to the fore, and he later admitted his surprise at the win, his first in a time trial as a professional cyclist.
''It was a real different time trial,'' he said. ''I am one the guys who rides with high cadence. That is something you needed to keep going after the climbs to get the rhythm again for the descent. But I am really surprised to win my first time trial.''
Meanwhile, Australian Cameron Meyer (Garmin-Cervelo) was disappointed he was unable to emulate his third place overall in Oman last year.
The West Australian's ambition was cruelled in Friday's 157.5km fourth stage from Sultan Qaboos University in the outskirts of Muscat to Green Mountain after he found himself badly positioned and adrift of the leaders when the peloton split with 30km to go.
He finished 87th on the stage and 12.05 to Gesink to drop to 60th overall at 12.22 before Saturday's time trial.
''When Sky threw it in the gutter I decided to go on the inside,'' Meyer said of Friday's stage. ''I wasn't strong enough to follow Thor [Hushovd, his world champion teammate] through, and I got caught on the inside - then the split happened, and I was in the second group.''
''The second group never came back. It was a silly mistake, and cost me a go at [overall classification].''
In Saturday's time trial, Meyer was 20th at 1.27 to Gesink.
''It was a little bit too hilly for me,'' he said. ''By the time you got to turn around, a lot of energy had been sapped out of you [from riding into the headwind].
''It was very hard to claw your way back on the way back.''
Published in
http://www.smh.com.au/sport/cycling/gesinks-timetrial-win-in-oman-turns-spectators-thoughts-to-france-20110220-1b12x.html
Posted by Thani Harith al Mahrouki at 00:21