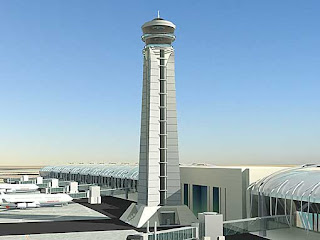 The development of Oman's largest airport, Seeb International Airport near the capital, Muscat, will result in one of the world's most ultra modern airports.

A brand new terminal building, 32 air bridges, two runways, a new cargo terminal, 6,000 parking spaces and much more - those are the main components in the development of Seeb International Airport.

Located near Oman's capital, Muscat, Seeb is the country's largest airport. With up to five million passengers a year, the existing terminal from 1973 has now reached its maximum capacity.

The building is relatively large for an airport with that capacity because the intention is to provide a high standard of comfort in the terminal. In addition, Seeb is going to be a big transit airport, and extra space is needed to guide the many transit passengers through the terminal with ease.

Option to expand
Since traffic forecasts shows that the 12 million passenger mark will be reached relatively few years after its opening in 2010, the project has been prepared to allow the airport to expand to double its size up to 48 million passengers.

Other aspects of the project
The project includes some 70 buildings apart from the terminal, including a 90-metre high control tower and an Air Traffic Management Centre.

Furthermore, the existing runway at Seeb is to be upgraded and supplemented with a new runway. It will be able to take the world's largest passenger plane, the Airbus 380. The project also includes parking facilities and a motorway to the airport with three lanes in either direction, complete with a companion interchange feeding into existing motorways.
The entire project will be completed while the existing airport is still in use.