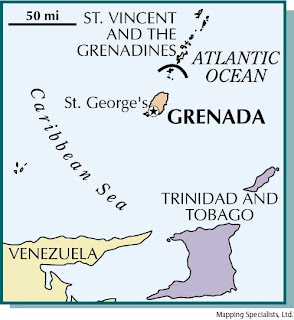 ARE WE, as a nation, truly sovereign and independent if we cannot secure and protect what is rightfully ours under international law? After 34 years of Independence, 1974-2008, the maritime boundaries of the Sovereign State of Grenada, remains undefined and unsettled. This failure rests on two things; the negligence of a succession of Grenadian governments, and the obduracy of the government of Venezuela.
For economic survival and progress, Grenada's access to the natural resources of oil and gas under the seabed around Grenada, Carriacou and Petite Martinique must be secured, without further delay.
The people of Grenada must be made to understand the vital importance of these resources to their economic uplift and the social and economic security of future generations of Grenadians.
The people of Grenada must be called upon to stand up and to demand immediate and meaningful action from the government towards settling the nation's maritime boundary with Venezuela.
The young people of Grenada, in particular, owe it to themselves and their children to show the world that they are prepared to stand up and fight to acquire and protect what is rightfully theirs.
We should not, because we are a small island state, allow ourselves to be pushed around, be bullied, be cowed and hoodwinked by Hugo Chavez of Venezuela, while he extracts hundred of millions of dollars worth of oil and gas from under the seabed, in areas that would rightfully fall to Grenada under international law.
Our young people must be shown how to stand up, lift their hands and remove the economic noose of unemployment from around their necks, the choking hand of lack of educational opportunities that is gripping their throats, the suffocating pillow of rising cost of living that is covering their faces, and they must be made to do so, now!
As an independent nation we cannot continue to crawl on our hands and knees to donor nations with begging bowl in hand. There is no dignity in that posture!
As an independent nation, we cannot continue to allow ourselves to be treated as a defenceless woman to be wantonly raped and abused by every foreign adventurer and con-man posing as an investor. There is contempt in that!
Our young people must be shown how to walk upright, heads held high, a glint in their eyes and money in their pockets. They must be shown how to walk tall and be proud Grenadians. They must be taught to identify international fraudsters and tricksters and how to deal with them.
We know that by international law every nation is entitled to 12 miles out to sea as its sovereign territory. A nation is entitled to 200 miles out to sea as its exclusive economic zone (EEZ), in and under which waters that nation is entitled to exclusive exploitation of whatever is to be found. Where there are two or more nations closer together than these distances, the boundaries are settled by agreement or by arbitration in the tribunal established for that purpose, that is, the United National Commission on the Law of the Sea (UNCLOS).
Chavez has refused to sit with Grenada to fix the boundary. Our recourse is to apply to UNCLOS to have the boundary settled. If Chavez refuses to submit to the authority of international law, then Grenada should set its own boundary.
In those circumstances, we must seek to enter into a treaty with a powerful neighbour who has the military capacity to assist us in defending our sovereign territory so that we can begin exploring and exploiting our oil and gas resources.
* We would have no other choice.
* What is our alternative, in a world environment of escalating oil and gas prices?
* What is our alternative, in a domestic environment of climbing national indebtedness?
* What is our alternative, in an international climate of rocketing food prices?
* What is our alternative, in our present situation of virtual collapse of our economy?
None but an immediate and forceful call by "We the People of Grenada" on Hugo Chavez, president of the Bolivarian Republic of Venezuela, or whatever else he chooses to call himself, for the quickest possible settlement of our maritime boundary with Venezuela.
Chavez must be told in the clearest and strongest language we can use that: "We want we damn oil and gas. It's ours. We want it, and we want it now!"
Wait, my people! Wait for the call.
Have a Happy New Year while you wait on the action.
* Reynold C. Benjamin is leader of the Grenada United Labour Party.
Published in
http://www.nationnews.com/editorial/4321915929331.php
Posted by Thani Harith al Mahrouki at 22:45