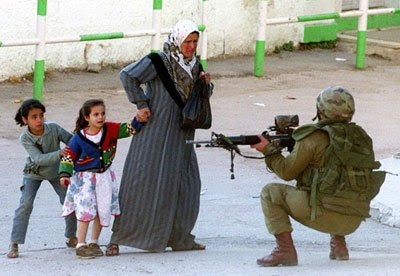 
I don’t know how much television coverage of the carnage that is taking place in Gaza now is seen in USA. The Israelis are behaving, like unruly devils, killing indiscriminately and in the most brutal and inhuman manner. Their behavior is very much comparable to that of Nazi Germany, regardless of what western politicians think or want to believe. It is inhuman, atrocious, diabolical and completely unacceptable to any human being except for sadists, the mentally retarded or those who suffer from extreme compassion deficiency!

Can anyone imagine that we still have people, in today's world, who think that “A thousand non-Jewish lives are not worth a Jew’s fingernail” Dov Lior, a Jewish Rabbi is one of many Israelis who think so: http://desertpeace.wordpress.com/2008/03/03/the-wisdom-of-satan-comes-alive-in-israel/

Seumas Milne, The Guardian’s columnist, in his article ‘To blame the victims for this killing spree defies both morality and sense’ dated 5th March 2008, writes:

The attempt by western politicians and media to present this week's carnage in the Gaza Strip as a legitimate act of Israeli self-defence - or at best the latest phase of a wearisome conflict between two somehow equivalent sides - has reached Alice-in-Wonderland proportions.
http://www.guardian.co.uk/commentisfree/2008/mar/05/israelandthepalestinians.usa

Even animals would feel for the suffering of the children of Gaza. The state of western government’s denial is incomprehensible and absolutely reprehensible!

My heart bleeds and my eyes tear when I see a helicopter, an F16 or a tank attacking civilian buildings in the most densely populated piece of land in the world. Yesterday, a Palestinian was pleading for permission to bury their dead. He said that the world community is propagating the motto of “decent life for human beings” but they (Palestinians) are being denied even the right to a decent burial of their dead! What a pity! And shame on the so called civilized world!

Western politicians, 60 year after World War Two, are still mourning the Holocaust, but are conveniently forgetting the 60 years of continuous Palestinian suffering and abandoning this dispossessed and oppressed people whose plight intensifies by the day. Seumas Milne of UK’s Guardian writes “the US and Europe's response is to blame the principal victims for a crisis it has underwritten at every stage.” He also adds that:

BBC presenters have insisted that Palestinian rockets have been the 'starting point' of the violence, as if the occupation itself did not exist. In the West Bank, from which no rockets are currently fired and where the US-backed administration of Mahmoud Abbas maintains a ceasefire, there have been 480 Israeli military attacks over the past three months and 26 Palestinians killed. By contrast, the rockets from Gaza which are supposed to be the justification for the latest Israeli onslaught have killed a total of 14 people over seven years.
http://www.guardian.co.uk/commentisfree/2008/mar/05/israelandthepalestinians.usa

How unjust and cruel.

What is happening in Gaza, with the blessings and total support of USA and its allies as was evident at the Security Council: http://www.independent.co.uk/news/world/politics/us-and-arab-states-clash-at-un-security-council-790465.html, invites nothing but more hatred towards the USA.
This is a strategic blunder since a new generation of hardliners is being created across the Muslim world as a result of this totally biased stand. Demonstrations are taking place in the Arab world and those who are demonstrating, from Mauritania to the Gulf, are not old people; they are not vegetable vendors or fishermen; they are university students who are bound to be the leaders of tomorrow’s Arab world!

It boggles my mind when the US asks why they hate us! When a single Israeli soul is lost, the whole western political machine and a large segment of the media mourn and condemn, but when a Palestinian or Lebanese child is killed the excuse is always that Israel has the right to defend itself or that the killing is accidental which is normal in times war. The support is unquestionable and unequivocal. Security Council Draft Resolutions condemning Israel are all the time vetoed by USA because it is alleged that they are “unbalanced”. The fundamental question that is never asked is “who stole whose land?” And “who occupies whose land?” The maps below speak for themselves. 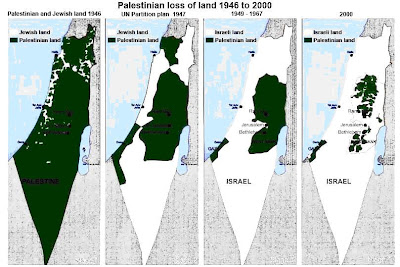 Since 1948 the Middle East has seen nothing but bloodshed and violence as Israel and its neoconservative henchmen keep on inventing wars for the region – Palestine, Iraq, Lebanon and Afghanistan; and new ones are currently being brewed against Lebanon, Iran and Syria.

In US elections each and every candidate has a different agenda for almost every issue except one subject which unites them all – Israel!

Would this acceptable if it involved any other racial or religious minority? But, this is USA’s prerogative and had it not been for Israel’s constant rampaging in the Middle East no one would care.

However, the almost blind support that Israel gets, regardless of its actions, is what inflames the people of the Middle East and the Islamic world. I think the time to rein in the Israelis is long overdue.

It must be bourn in mind that when Israel is mentioned it does not mean all Jews. There are respectable Jews who one would bow his head to with respect. These include gentlemen like Uri Avnery, Ilan Pappe and Norman Finkelstein http://www.memritv.org/clip/en/1676.htm

I pray and hope sense and justice prevail.
Posted by Thani Harith al Mahrouki at 22:47