A Japanese tanker damaged last week in the Strait of Hormuz near Oman was the target of a terrorist
attack, the United Arab Emirates state-run news agency has said.

It said remains of home-made explosives had been found on the hull of the M Star, which was damaged on Wednesday while travelling from Qatar to Japan.

Two days ago, an al-Qaeda linked group said it was responsible.

Officials previously said the ship may have been involved in a collision.

The crew of the ship reported an explosion shortly after midnight Wednesday last week, injuring one person.

The BBC's security correspondent Nick Childs says the news is likely to raise concerns about security for shipping in the Strait, a vital strategic waterway for oil supplies from the Gulf. 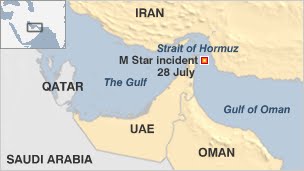 "An examination carried out by specialised teams had confirmed that the tanker had been the subject of a terrorist attack," the news agency said, quoting an unidentified coastguard source.
"UAE explosives experts who collected and examined samples found a dent on the starboard side above the water line and remains of home-made explosives on the hull," it said.


"Probably the tanker had encountered a terrorist attack from a boat loaded with explosives," the source was quoted as saying.

The ship's owner, Mitsui OSK, said it could not confirm the reports. Japanese Foreign Minister Katsuya Okada said the government was aware of the report but was yet to confirm its details, the Agence France-Presse news agency said.

Previous theories about the cause ranged from a large wave to a US nuclear submarine. Part of the mystery surrounding the incident was the relatively minor damage to the tanker, which did not seem to conform to any particular explanation.

A statement signed by a "battalion" of the Abdullah Azzam Brigades, which is linked to al-Qaeda, said one of its suicide bombers was responsible for the blast.

The claim, posted on a website used by Islamist militants, could not be independently verified, and the group has made false claims in the past.

The French-operated tanker Limburg was badly damaged off Yemen in an attack in 2002, as was the US Navy warship Cole in an incident in the Yemeni port of Aden in 2000, in which 17 US sailors were killed.