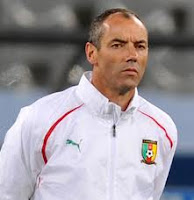 (AFP) Saturday 11 June 2011
Experienced French coach Paul Le Guen, who led Cameroon at the 2010 FIFA World Cup™, was today named as the new boss of the Oman national team, officials said.
Le Guen succeeds compatriot Claude Leroy who was sacked after Oman's poor performance at the last Gulf Cup.
The new coach will arrive in the country on 27 June before Oman's friendlies against Kuwait and Lebanon.
Those matches are part of the preparation for qualifying for the next FIFA World Cup with the Asian zone kicking off later this year.
Published in
http://www.fifa.com/worldfootball/news/newsid=1451072.html
Posted by Thani Harith al Mahrouki at 23:27